The official reason for its interestingness is the Organ Pipe cactus.  This cactus is pretty common in Mexico, but very rare in the US.

Sure enough, the desert and mountain landscape filled cacti was fascinating.

Even though the Organ Pipe cactus is the star of the show, we felt that the much more abundant and common Saguaro cactus was more impressive.  These get ten, twenty, maybe even thirty feet high.  It really feels like you are walking though of forest of cacti.

The only downside to parks like this one, is that this is no drinking water whatsoever.  Nothing.  Definitely a big change from the lush green mountains in California, where drinking water is always just around the corner.

The bone dry desert landscape makes multi-day backpacking trips very difficult, if not impossible. You simply can’t carry that much water with you.  If you are ultra-prepared you can cache water on the route in advance, but that was too much trouble for us.  (Anyway, I would not recommend doing this for other reasons that we will get to in a second.)

So, instead of backpacking, we stuck to driving the two main car loops in the park and a day hike

There was the 37-mile long Puerto Blanco car loop which takes you through the Western side of the park.  We got out of the car in the Senita Basin for a short day hike along the well-marked trails in this area (you can get a detailed map at the visitors center).  The southern-most section of this trail skirts the Mexican border. 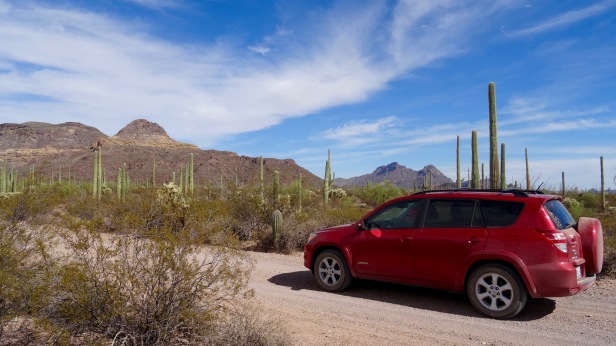 There was also the 21-mile Ajo Mountain car loop on the Eastern side of the park.  This latter one is much more spectacular because it goes into the foothills of the mountains and because the cactus forests are more impressive.

Both loops are dirt roads.  A high-clearance vehicle is recommended for the Puerto Blanco loop, but you can also make it in a regular car if you are careful and take it slowly.  Either way, make sure you fill your car up with gas at the town of Why or at the closer-by Lukeville border crossing.

There was another reason we found this park fascinating and why we avoided multi-day backpacks.  It gave a really first-hand glimpse into the reality of illegal immigration into the US.  Being (legal) immigrants ourselves, this issue is close to our heart.

You should know that OPCNM is right on the border with Mexico, right next to the Lukeville border crossing on the US side, with the Mexican town of Sonoyta right on the other side.

The park is full of constant reminders that illegal immigration is a huge issue in this area.

On the main road before you enter the park, you have to go through multiple border patrol checkpoints.  If you are a foreign tourist, make sure you have your passport with you.

Both inside and outside of the park, you constantly run into big border patrol trucks on the prowl for illegal immigrants.  Some of them have high-tech cameras or (what looks like) heat sensing equipment on them.

At every trailhead there are large signs warning that you may run into people crossing the border and urging you to avoid contact and call 911.

When you hike the trails, you will rescue beacons (also known as panic poles), which are big radio towers with a big “help me” button.  If a migrant presses the button, the border patrol will come within an hour to help (and presumable detain) them.

You will also see water stations which are 55-gallon plastic barrels with water marked with flags on a 30-foot pole.  An organization called Humane Borders places these water stations at various points in the desert to provide drinking water to migrants .  This organization is highly controversial in the US.  Supporters point the fact that it saves many migrants from death due to heat exposure or hypothermia.  According to this map on their website, a total 1,138 migrants died crossing the border in Arizona between 1999 and 2007.  Opponents feel that they are encouraging illegal immigration.

With the US presidential elections nearby, this is a hot-button issue.  Seeing all of this first-hand sure changes the issue from something abstract that you read about in the newspapers to something real and tangible.

As I already mentioned, the Puerto Blanco car loop takes you right along the border with Mexico.  You literally drive less than 100 feet from the border.  I had expected some big high-tech fence.  But no, there is just a dirt road on the American side, some low wooden poles that anyone can easily step over, and a big busy highway right on the other side in Mexico.

Most unnerving of all, the park visitor center is named in honor of Kris Eggle, a park ranger who was shot dead by Mexican gangs who had crossed the border.  A sign with his story is right in front of the entrance.

The park website has a section “Is it safe to visit the park?” (The answer is: yes.)

All of this made us none too eager to go backpacking in this area.  Frankly, we felt a bit nervous just camping on the campground and doing day hikes in the area.  Nothing ever happened, though, and I wouldn’t want to discourage anyone from coming here.